Reason For Lack of Posts...

Not the biggest writer, never have been. I've played guitar some 35 odd years and I think I'm pretty good. So what. I enjoy playing and listening to music immensely and take great pleasure in practicing. I've always held the belief my writing skills are laughable, plus the fact I've never really had to write much except for the occasional book report in early grade school.

I now know that "I" don't exist. By the same token all beliefs are false, only seen as true. Damn... There goes my belief about my piss-poor writing. I want to make one point though, All suck in whatever they endeavor, until they practice enough and develop the required skills. 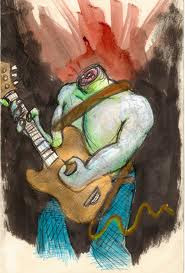 As it stands my writing skills are sub-par, yet now I have chosen to begin honing them as I did on guitar so many years ago bloodying my fingers playing riffs over and over and over again. It wasn't uncommon for me to play as many as eight hours in a single day when I was younger, feeling the wrath of my sore fingers the next day.

I have so much to say so I start writing but then another "belief" drops in and says "Who cares?" "So you're enlightened, who the fuck cares? Hahahaha!!! Nobody but me and that's fleeting feeling itself.

So, the thing is, at the moment, I have a desire to express my experiences of no self. I don't write that well yet but since I like the subject matter and as I post more and more, hopefully that will change.

I've never done a blog before. Hell I haven't written anything like this since trying to keep a dream journal in the 90's. This is different. I've always known that writing can help a person learn more about themselves and what's going on around them. So here is the first installment.

To begin I will preface this by stating I have always had a recurring self-esteem problem. Sometimes a lot sometimes not so much. I really identified with the “Peanuts” character “Charlie Brown.” It seemed he could never get a break and found myself thinking “That’s me.”

So, it all started when an ex-girlfriend and I broke up after a tumultuous 4-1/2 year relationship. Devastated, I started going to the local public library to search for self-help improvement books, ranging from “how to be the best boyfriend” to “how to think on your feet.” Those books then morphed into hypnosis, NLP, lucid dreaming, OBE’s, etc., etc. You name it I probably read it.

A friend suggested Eckhart Tolle and I became engulfed with what I was desperately trying to embody: The Now. Worked sometimes but never really stuck. Soon after I had discovered Adyashanti and he seemed really cool but again I couldn’t replicate his results in me. Byron Katie helped me to discover “Is it true?” and the fact that “I” do the negative things to me not “others.”

My next discovery was Jed McKenna. Holy shit this was so what I was looking for, a no bullshit description and step by step of enlightenment. Although this was a big piece of the puzzle, it was very violent and painful for me at the moment as I was experiencing extreme depression exacerbated by large amounts of alcohol, enough to put me in a 72-hr suicide watch. What an experience THAT was.

Then Dad passed away and a shimmer of light happened. Although I missed him greatly I couldn’t really find the sadness. Don’t get me wrong I felt (and still occasionally feel) extreme moments of grief and sadness, but it was for me not Dad. Whoa…

I was noodling around one night on an Eckhart fan message board and someone had made some flippant “I don’t care” kind of statement and the response was, “Are you from the RT site?” In that moment a bell went off in my head and immediately googled “RT”, found the Ruthless Truth website and started poking around there. I didn’t really feel safe there as I didn’t feel like getting ripped apart (yet) lol.

I found the RT nexus on Facebook, started a dialog with Mircea and found myself trying to justify everything I was saying in order NOT to look. It’s called “slithering.”

Kevin then called me out on it saying I wasn’t worth the time and move on, I wasn’t ready. I blew a gasket! I wrote back, “You don’t know me or my situation!”, but I didn’t say it that nicely. But then I thought, “How can I take his comment so personally when he doesn’t even know me??? DING! I cooled down later and after deleting my scathing comment, pm’ed an apology but he said “Apology not accepted man, Go LOOK!”

3 days later illusion of self was clear.

Thanks Kevin and Mircea.

I appreciate you reading this, and please leave a comment if you like.
Posted by highlife66 at 2:01 AM No comments: